Q:  “What is this Zombie Pizza! Token that came in the box and how do I use it to dominate my friends and/or make them laugh?” 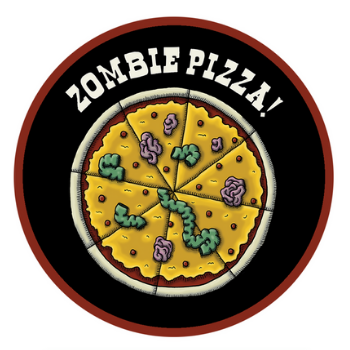 A:  The Zombie Pizza! token sits quietly at the center of the table until everyone has at least 1 Talent card in play.  Then it goes live.  The person with the least cards in hand may shout “Zombie Pizza!” and snatch it like a mongoose.  If you possess the token, at the start of your turn shout “Zombie Pizza!” to draw an extra card from the Main Deck, OR take Blood, Guts, or Brains from the Bank.  After you have drawn at least one card with the Zombie Pizza! token, the token can transfer to another player with the least cards in hand, provided that player is on the ball, shouts “Zombie Pizza!” and snatches it like a mongoose.  If two or more players are suddenly tied for the least cards, obviously the faster one gets it.  If no one has less cards than the current lord of the token, it stays put.

A:  Oh, alright.  Click the card.  For some reason we actually thought you’d google it. 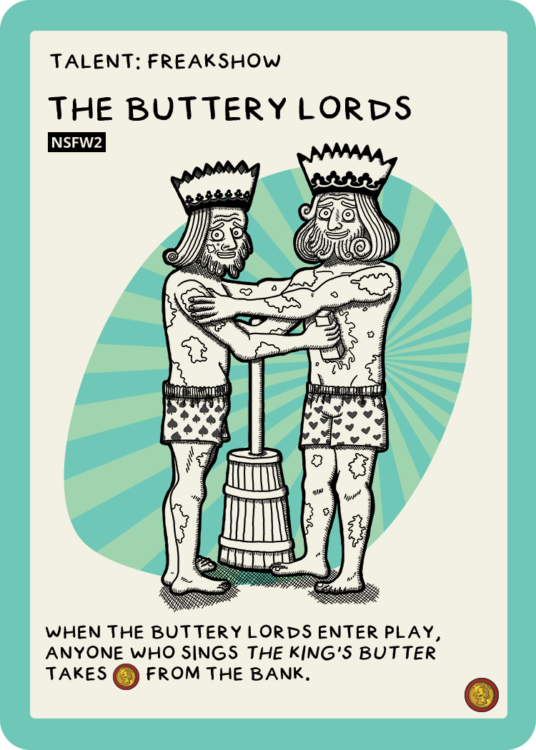 Q:  “Why are some Talent cards numbered?”

A:  The Main Deck consists of 52 Talent cards in 4 suits (Goats, Weregartners, Hellephants, and Ma’ampires).  Each suit is numbered 2-14.  These numbers have nothing to do with our game.  Buuut, it means that if Zombie Circus Goats is the only deck you have access to (and it certainly should be), then with the tiniest bit of thought you can use it to play Poker, Spades, Hearts, Crazy 8’s and all the other classic card games you can shake a stick at.

A:  When you play a Tent, you decide right then and there which of your played Talent cards go into that Tent.  You can take Talent out of a Tent any time during your turn.  You can’t substitute new Talent into a Tent, after it has been played. 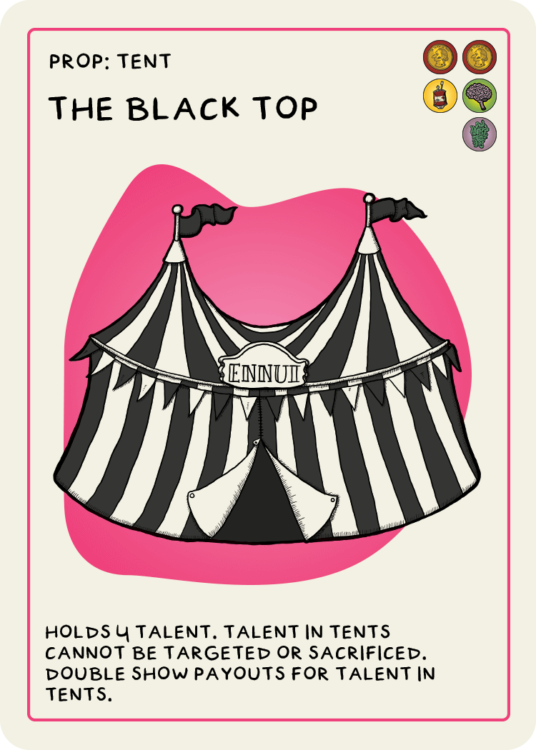 Q:  “I just played the Rotten Rhinoceros.  Do I discard down to 3 cards?”

A:  That depends.  Are you a player?  It would be odd if you played the Rotten Rhinoceros and you weren’t a player. 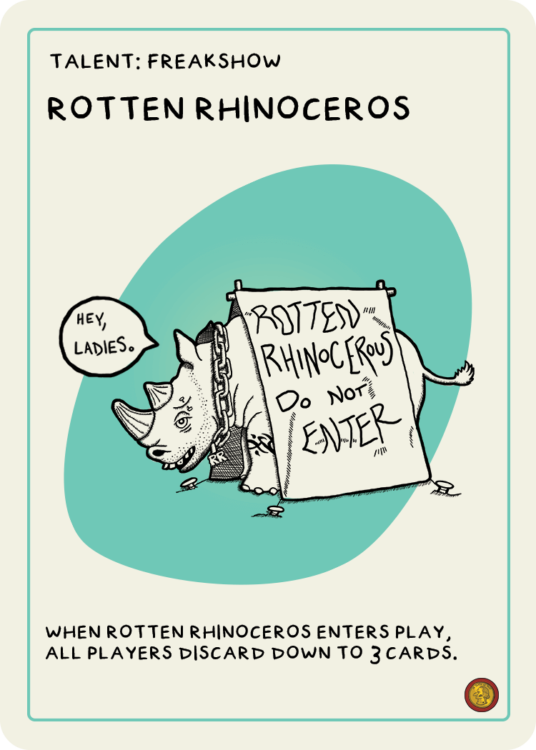 Q:  “Can I use Frenemies to halt a trade I’m involved in to take all the cards in that trade?”

A:  Yes you can.  You sure know how to make Frenemies. 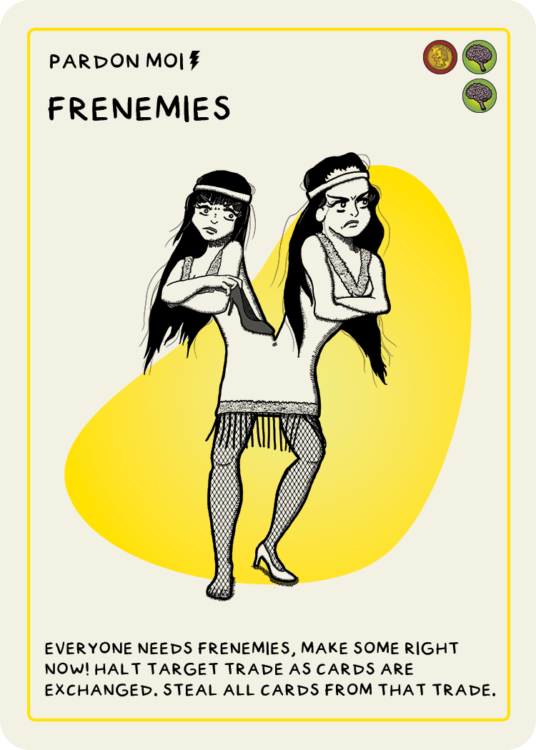 Q:  “I just played General Malaise.  Do I sacrifice a Goat?” 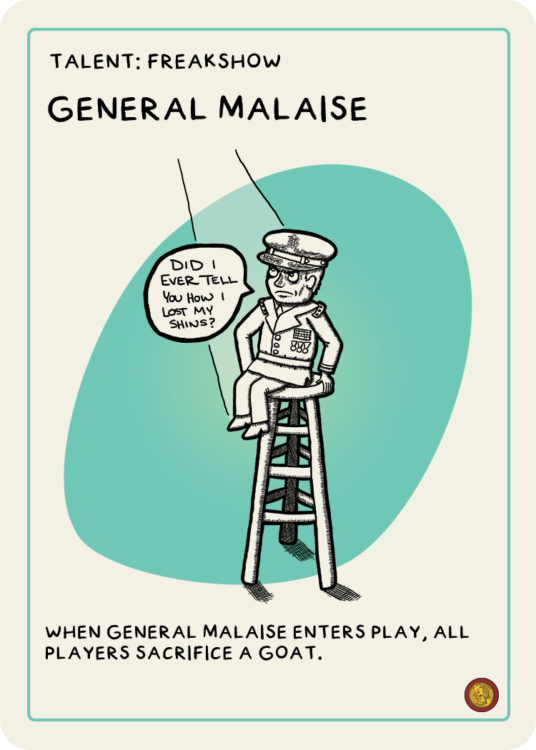 Q:  What happens when somebody slaps the table in response to a non-table-slapping card?”

Q:  “My former friend Rick just played Strong-Arm Services and stole my show payout.  Can I be the victim of Frenemies, or other cards that would steal from me, force bad trades, or make me discard before the end of my next turn?” 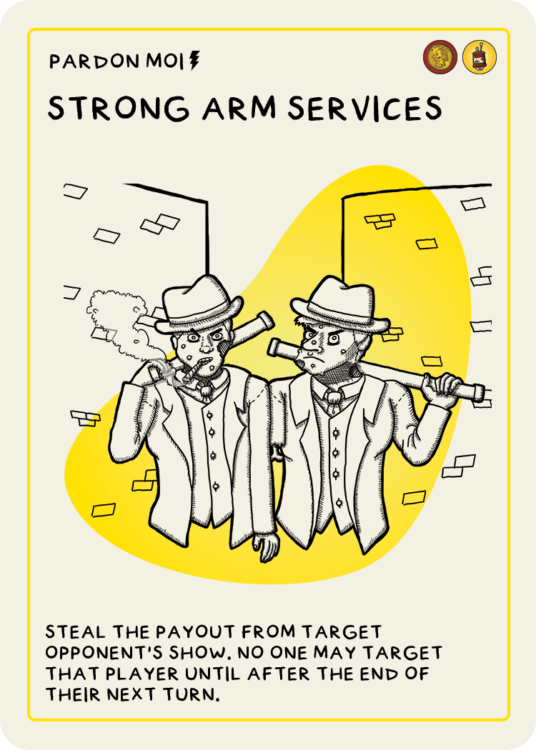 Q:  “If I steal One Horn Hammerstein with Gimme!, or get him in a trade, can I use his special ability on my turn, even if somebody else has already used it this game?”

A:  Yes.  His ability triggers each time he enters play.  That goes for all cards with “enters play” abilities. 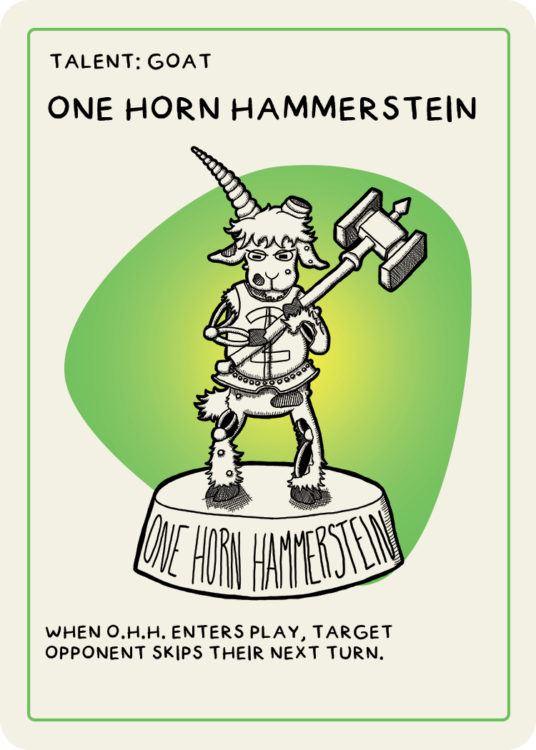 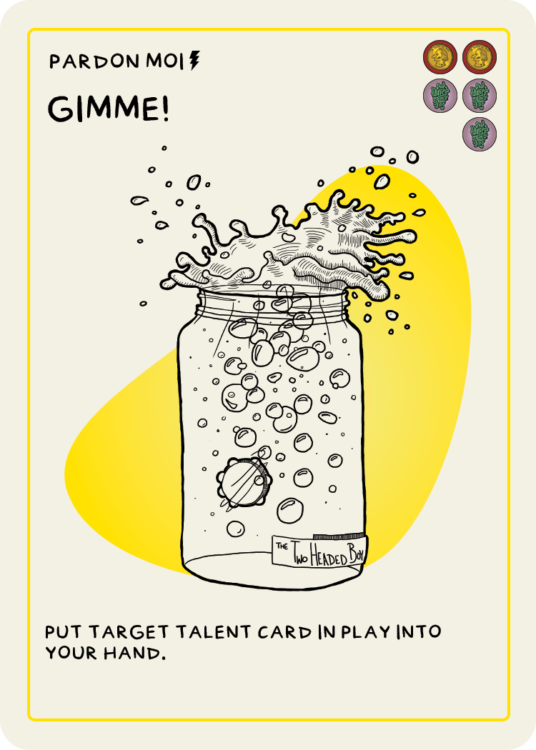 A:  To arbitrate these situations, follow this rule:  “Last In, First Out.”  In other words, if someone plays an effect, or if an event card triggers an effect, you may respond with a Pardon Moi card before that effect resolves.  The player who plays their effect LAST resolves their effect FIRST. 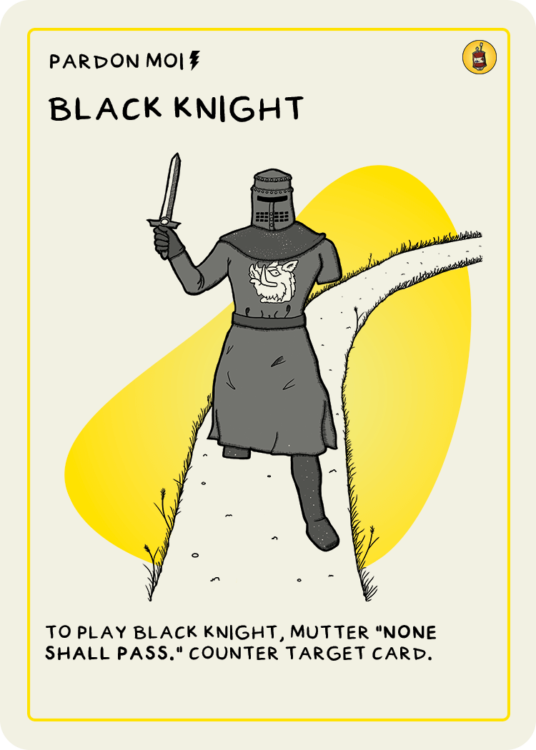 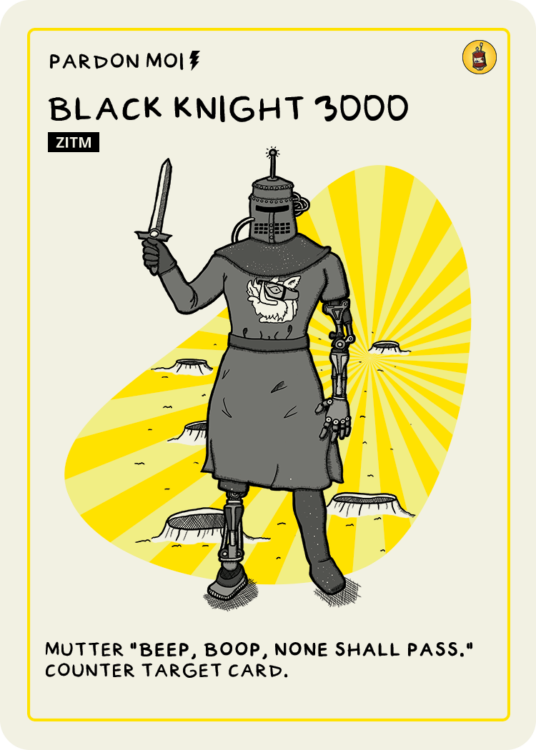 A:  It means that the player trying to play that card (Talent card, Pardon Moi card, Prop card, etc.) puts it into the relevant discard pile after they pay the Filthy Lucre cost for it (if any) instead of into play or instead of taking effect.  The countered card does nothing, it goes away, it is worse than garbage, a complete waste of time.  The discard pile for the Main Deck is called the Boneyard.  The discard pile for the Carnival Deck is called the Crypt.  EVENTS CANNOT BE COUNTERED.

Q:  “How do I say “Black Francis” in a slooow Russian accent?”

A:  Make your mouth as lazy as possible, then try this:  “Buh-lek  Fuh-ren-ziss.”  For expert tips, contact the Russian Embassy. 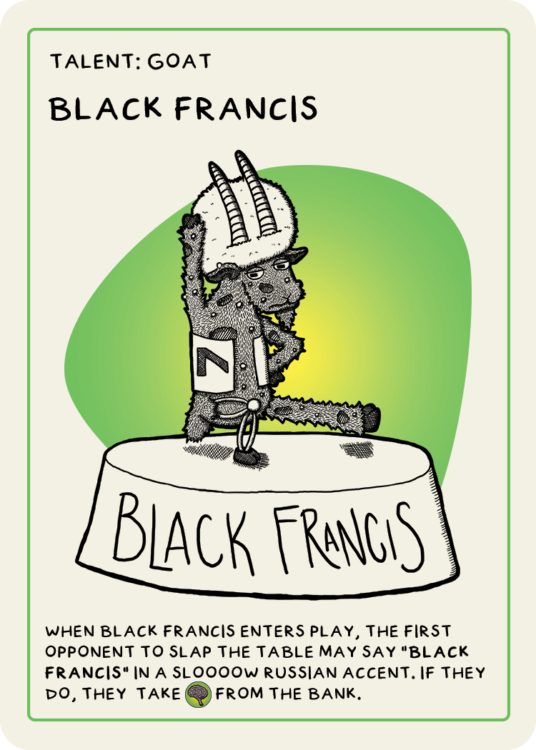 Q:  “If I play the Tout before I show some of my Talent in a Tent, does it double their already doubled show payout?” 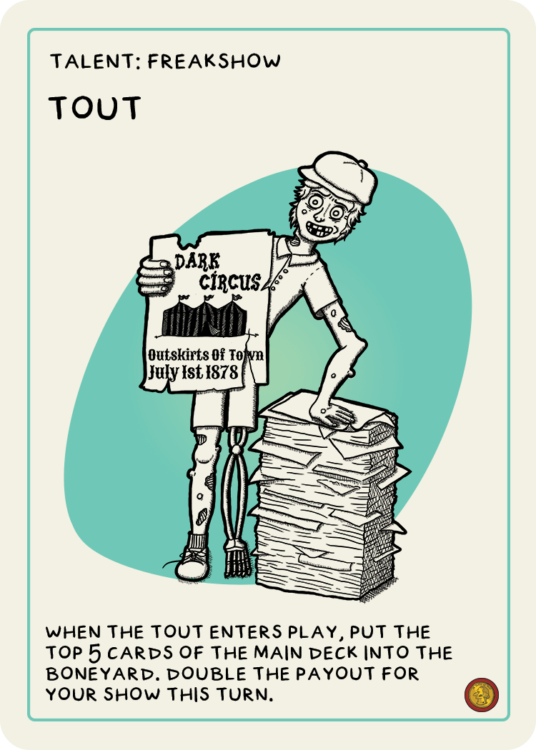 Q:  “What’s the deal with the infinity symbol on Ms. Misery?”

A:  It means if you can think of a number, Ms. Misery can be that number.  If you’re using the ZCG Main Deck to play a classic game such as Poker, we suggest assigning her the number 14.  (So she’s the Ace of Blood, obv.) 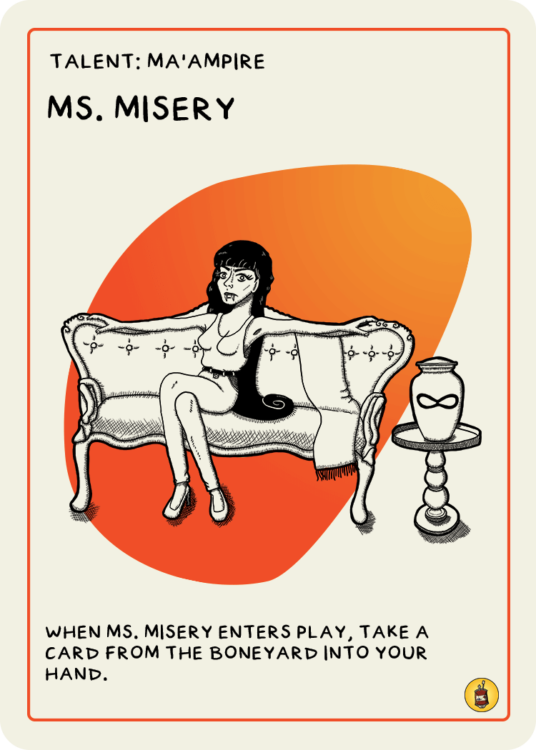 Q:  “What happens if two players slap the table at the exact same time?”

A:  Somewhere in the heart of Texas, a Peg-O-Dile gets its wings. 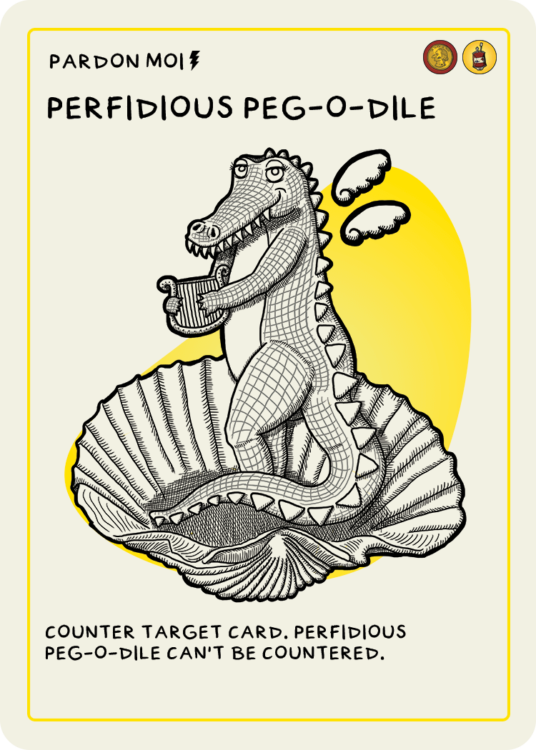 Do you have a dumb question?  Email it to us.

We may choose to answer your dumb question.  If we do, it will appear in the list above.